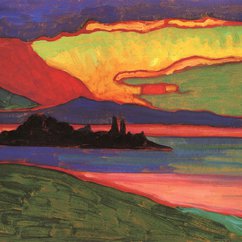 Gabriele was born in Berlin, 1877. She was left without a father at age 9, and when she was 22 - without a mother. When she met Kandinsky she had been two years in America in the company of her sister and with the album drawing. They traveled everywhere. Coming back in Germany, Gabriel had not been able to find where to go to learn more - the girls were not taken all the art schools. Finally, in 1902, she received an offer to join the Union of women - artists in Munich. And she went there.