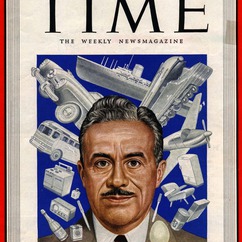 Raymond Loewy, in full Raymond Fernand Loewy, French-born American industrial designer who, through his accomplishments in product design beginning in the 1930s, helped to establish industrial design as a profession. Loewy studied electrical engineering at the University of Paris, graduating in 1910. His studies in advanced engineering at the École de Lanneau were interrupted by the First World War, in which he served in the French Army; he received his degree in 1918.